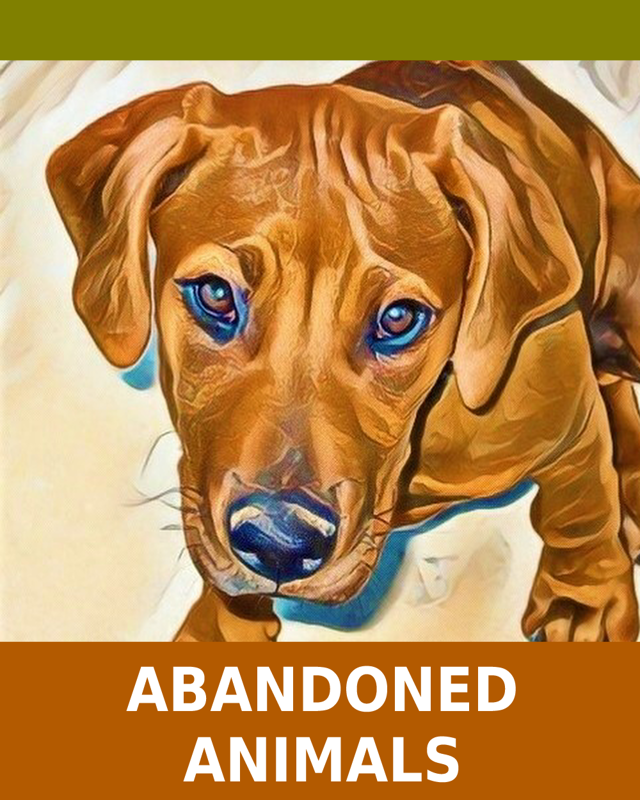 The majority of these animals die. Some are rounded up and taken to animal shelters where they are likely to be euthanized, often within days.

Some become feral, especially cats. Feral cats are difficult to socialize enough to be adopted out. Generally, only recently abandoned cats and very young feral kittens can be tamed.

Why Humans Abandon Their Animals

Training: Many people acquire a companion animal without understanding how to train the animal to live in a human household. Destructive, disobedient, unstable and dangerous animals are much more likely to be abandoned than well trained and adjusted animals. Shelters are filled with animals that have socialization, housebreaking and destructive issues, all of which could have been prevented through training techniques. Cats are often abandoned because they damage furniture when not provided with alternative scratching devices. Dogs are often abandoned because they bit a human. These issues can be avoided if the animals are properly trained and socialized, and if the issues are addressed before they worsen.

Changes: Humans losing or changing their jobs, experiencing a divorce, having a new baby, or going through health issues sometimes abandon their animals. Animal guardians may be overwhelmed by the changes. Ill humans may have difficulty taking care of their animals. A demanding new job may cause new stresses. Couples who treat their animals like a babies sometimes lose interest in the animals when a human baby is born. When an animal guardian dies or becomes hospitalized, family members sometimes don’t know what to do with their animals.

Time: Properly caring for a companion animal requires a significant amount of time. When humans begin to prioritize other things above their animals, neglect of the animals can occur. Often, parents make the mistake of thinking their young children will be able to take care of the animals, only to find out that they are not mature enough for the responsibility.

Moving: Relocating from a one home to another leads some animal guardians to abandon their animals. The new home that they relocate to may not allow animals, or a new roommate may be allergic or simply doesn’t want an animal in the home.

Litters: Irresponsible animal guardians who do not spay and neuter their animals are faced with the difficult task of finding homes for litters.

Costs: Between vet bills, food, toys, beds, leashes, collars, grooming, etc., companion animals can be expensive. Many animal guardians underestimate the amount of money required to care for animals, or do not plan for the possibility of financial changes in the household. Old, ill and injured animals can require more money that may also not have been planned for.

Age: Older animals are sometimes abandoned when they are no longer considered cute and fun and require extra care and expenses.

Too Many: Companion animals are often acquired impulsively. When there are too many animals in the home, the dynamics may change. Animals may begin fighting with each other. When the animals are not spayed and neutered, it is often very difficult to find homes for litters.

Boredom: When a child receives an animal animal as a gift, a message can be given to the child that the animal is merely a toy. Children soon grow bored of new toys.

Travel: Many animals are abandoned in the summer when their humans simply don’t want to deal with figuring out what to do with the animals when they are on vacation.

Strays: People who find abandoned animals often take them in while searching for their family. If the animals' guardians are not found, these animals may be taken to a local shelter.

Think before you get an animal. Do extensive research to determine if you can afford the animal, have enough time for the animal, and can meet the animal's demanding physical, mental and emotional requirements.

Never give an animal as a gift. You have no right to decide if someone else is ready for the responsibility of a companion animal.

Do not adopt an animal for a child. Animals are not toys. Companion animals are the responsibility of adults, not children.

Ensure that no one in your household has allergies before adopting an animal. If someone in the home develops allergies, explore all options. If you cannot keep the animal, find the animal a new, loving home rather than abandoning the animal.

Be responsible and always have your animals spayed or neutered.

If you find yourself with less time than you once had for your animals, consider putting your animals into daycare or hiring someone to give the animals extra exercise and attention. Enlist the help of family, friends and neighbors.

You made a commitment to your animals. You should never move to a new home if you cannot take your animals with you. If you feel you have truly exhausted all your efforts, or cannot afford the costs anymore, seek out responsible new caretakers for your animals.