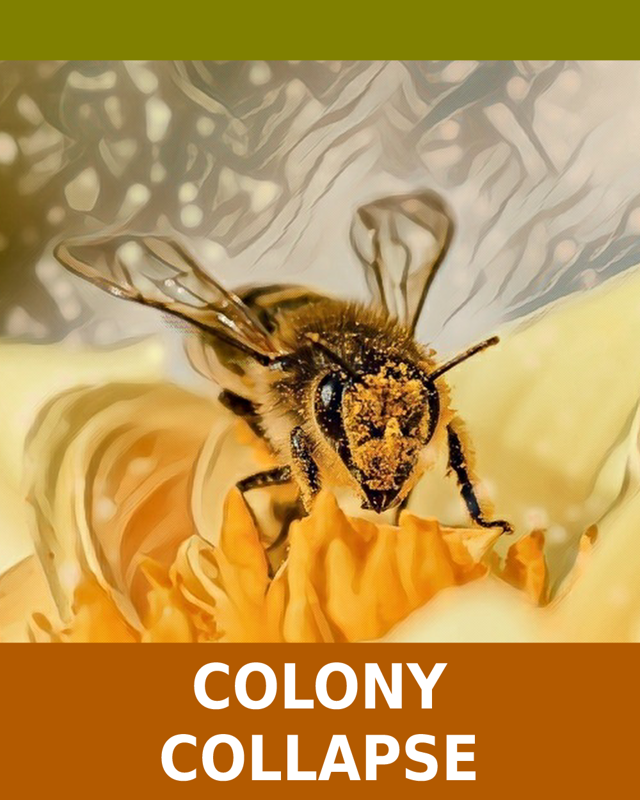 Bees are flying insects closely related to wasps and ants, and are known for their role in pollination and for producing honey and beeswax. There are nearly 20,000 known species of bees in seven to nine recognized families. They are found on every continent except Antarctica, and in every habitat on the planet that contains insect-pollinated flowering plants. Bees are adapted for feeding on nectar as an energy source and pollen for protein and other nutrients. Most pollen is used as food for larvae. Bees have a long tongue that enables them to obtain the nectar from flowers. They have antennae and two pairs of wings, the hind pair being the smaller of the two.

Bees and other insect pollinators are threatened by environmental challenges including habitat loss, degradation, fragmentation, non-native species, diseases, pollution and pesticides. Wild bees have been dying off in large numbers, as well as domestic bees. Some species are now listed as endangered.

Colony collapse disorder (CCD) is a phenomenon in which worker bees from a European honey bee colony abruptly disappear. The reasons for its increasing prevalence remain unclear, but many possible causes have been proposed: pesticides, primarily neonicotinoids; infections with Varroa and Acarapis mites; malnutrition; various pathogens; genetic factors; immunodeficiencies; loss of habitat; changing beekeeping practices; or a combination of factors.

Neonicotinoid pesticides are injected directly into the seed of a future plant. That means traces of the insecticide may always be part of the plant tissue. A growing body of research has implicated neonicotinoid in the death of honeybees. There is particular concern that neonicotinoids might have sub-lethal effects on bees, not killing them outright, but causing enough damage to make them vulnerable to an assortment of other ills.

Colony Collapse Disorder is when a sudden loss of a colony’s worker bee population occurs with very few dead bees found near the colony. The queen and brood (young) remain, and the colonies has relatively abundant honey and pollen reserves. Hives cannot sustain themselves without worker bees and eventually die. This combination of events results in the loss of the bee colony.

A number of other diseases are afflicting honeybees, including the tobacco ringspot virus, a plant disease that has been implicated by researchers. Commercial honeybee colonies may be trucked thousands of miles for work, including the massive and lucrative spring almond pollination in California, which requires billions of bees. The stress of travel kills many of them. Honeybees are also starving as open land, with the flowers and plants that provide food for the bees, is now planted with monocultures of corn and soybeans that offer little nutrition.

The best action you can take to improve bee survival is not to use pesticides indiscriminately, or to eliminate using pesticides entirely. In particular, avoid applying pesticides during mid-day hours, when bees are most likely to be out foraging for nectar and pollen on flowering plants.

In addition, you can plant pollinator-friendly plants-plants that are good sources of nectar and pollen such as red clover, foxglove, bee balm, joe-pye weed, and other plants.