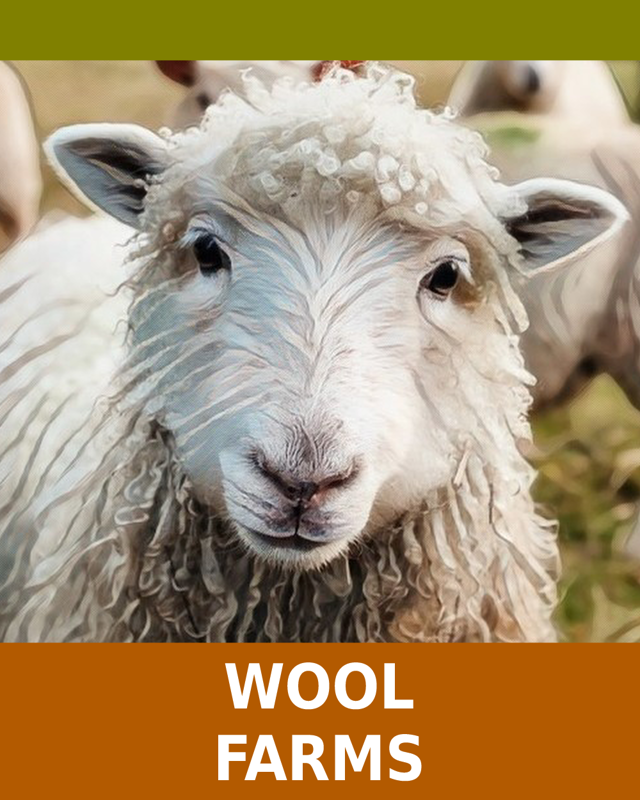 Many people believe that shearing sheep helps animals who might otherwise be burdened with too much wool. But without human interference, sheep grow just enough wool to protect themselves from temperature extremes. The fleece provides effective insulation against both cold and heat. Until shears were invented in 1000 B.C., the only way to obtain wool was to "pluck" sheep during molting seasons. Breeding for continuous growth began after the advent of shears.

With an estimated 148 million sheep, Australia produces eighty percent of all wool used worldwide. Flocks usually consist of thousands of sheep, and individual attention to their needs is virtually impossible.

Just weeks after birth, lambs' ears are punched, their tails are chopped off, and males are castrated without anesthetic. According to Australian Law Reform Chairman, M.D. Kirby, Australian sheep suffer over 50 million operations a year that would constitute cruelty if performed on dogs or cats. Extremely high rates of mortality are considered "normal": 20-40 percent of lambs die at birth or before the age of eight weeks from cold or starvation; eight million mature sheep die every year from disease, lack of shelter, and neglect. One million of these die within 30 days of shearing.

In Australia, the most commonly raised sheep are Merinos, specifically bred to have wrinkly skin (which means more wool per animal). This unnatural overload of wool causes animals to die of heat exhaustion during hot months, and the wrinkles also collect urine and moisture. Attracted to the moisture, flies lay eggs in the folds of skin, and the hatched maggots can literally eat sheep alive. To prevent "flystrike," Australian ranchers perform a barbarous operation--"mulesing"--or carving huge strips of skin off the backs of unanesthetized lambs' legs. This is done to cause smooth, scarred skin that won't harbor fly eggs. Yet the bloody wounds often get flystrike before they heal; and despite the feeling by many that mulesing may kill more sheep than it saves, the mutilation continues.

Aging sheep are subjected to "tooth-grinding," an unanesthetized procedure that sheep farmers claim reduces tooth loss and extends the sheep's productive life. A battery-operated grinder is used to wear down the teeth. Another method involves using the edge of a disc cutter to cut right through the teeth near the level of the gums. This terrifying and painful procedure exposes the sensitive pulp cavities inside and causes the teeth to bleed profusely.

Faced with such vast amounts of death and disease, the rational step would be to reduce the numbers of sheep so as to maintain the existing ones decently. Instead, sheep are forced to bear more lambs by the administration of drugs. Malnourished ewes are taken into laboratories and placed in climate-controlled chambers to determine how much exposure they can withstand before they die.

Like other "commodities," animals can fall victim to fluctuations in the economy. In 1990, 10 million Australian sheep were shot and buried in mass graves when they became practically valueless due to a lingering drought and low wool prices.

Sheep are sheared each spring, after lambing, just before they would naturally shed their winter coats. Timing is critical: shearing too late means loss of wool. In the rush, an estimated one million Australian sheep die every year of exposure after premature shearing. A closely shorn sheep is, in fact, more sensitive to cold than a naked man since a sheep's normal body temperature is about 102 degrees F, much higher than a human's.

When shearing, speed is everything. Shearers are usually paid by volume, not by hour, which encourages working quickly and carelessly. Says one eyewitness: "the shearing shed must be one of the worst places in the world for cruelty to animals. I have seen shearers punch sheep with their shears or fists until the sheep's noses bled. I have seen sheep with half their faces shorn off."

When the sheep age and are no longer effective wool producers, they are transported long distances to slaughterhouses in trucks and trains without food or water. Those who fall are trampled by other frightened animals. On arrival, the dead and dying are piled into heaps. Those with foot rot attempt to drag themselves on their knees.

The ultimate cruelty is the live export of seven million sheep every year from Australia to the Middle East, which the Wool Council of Australia supports as "an important component of the wool and sheep industry." These sheep travel vast distances until they reach the feedlots where they are held before being loaded onto ships. Many sheep, ill or wounded from the journey, faced with intensive crowding, disease, and strange food, die in the holding pens. Eighteen percent of sheep die during the 3-6 week transport process; in just one Australian feedlot, 15,000 sheep died from cold in 1983.

The surviving sheep--7 million a year--are herded onto huge 14-tier-high ships resembling the old slave-trade ships. Up to 125,000 sheep are packed tightly into each ship, each allocated an area hardly bigger than themselves, so that not all can lie down at once, or reach the feed troughs. Mired in their own waste for three weeks or more, the sheep suffer from sea-sickness, temperature extremes, disease, and injuries. Younger animals or babies born en route are often trampled to death. Shipboard mortality ranges up to 10 percent, and for every sheep who dies, many others become ill and are injured.

When the three-week trip to the Middle East is over, the surviving sheep are killed in ritual slaughter (Halal). Since Moslem religious law does not require that the knife be sharpened between kills, sheep often have their throats sawed open with dull knives. According to one witness in the Sitra abbatoir in Bahrain, men would begin slaughtering as soon as a pen was full. The sheep would "wave their heads in obvious confusion, trying to stand up and call out as the blood gushed from their throats." Other sheep are loaded into the trunk of a car for later slaughtering at the buyer's home.

Sheep aren't the only animals who suffer as a result of the wool industry. The Australian government permits the slaughter of approximately 5 million kangaroos a year because it views them as "pests" who eat grass ranchers want for their sheep and cows. Ninety percent of kangaroo killers are "weekend" hunters, killing by the most expedient methods available: running kangaroos down in trucks, poisoning their water, beating them to death, even impaling them on stakes and meat hooks and skinning them alive. The standard kangaroo hunting technique, as recounted by Paul and Anne Erlich in their book Extinction: The Causes and Consequences of the Disappearance of Species, is to "spotlight" them from cars at night. "The kangaroos would freeze in the light and were shot with rifles. Some were killed immediately, but some hunters purposely just wounded them--sometimes leaving them to suffer for hours or days so that their meat would remain fresh until they could be collected." According to Dr. Susan Lieberman of the Humane Society of the U.S., joeys, or young kangaroos "are not considered to be worth the cost of a bullet...and are often killed by being thrown against a tree or car bumper or kicked in the head."

In the U.S., coyotes, vilified for allegedly preying on sheep and other livestock, are poisoned, shot and burned alive by the hundreds of thousands every year by ranchers and the U.S. government.

Refrain from purchasing products made from wool or other animal products.