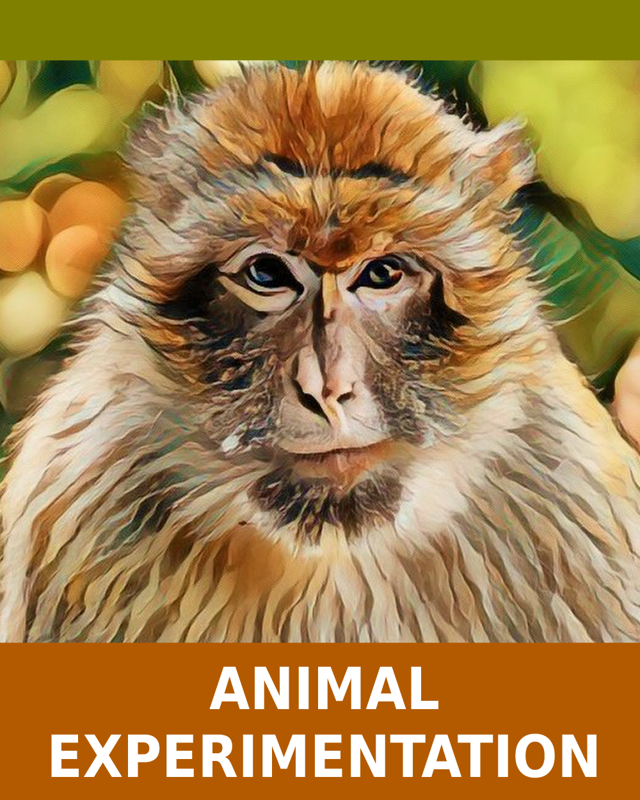 Vivisection, the practice of experimenting on animals, began because of religious prohibitions against the dissection of human corpses. When religious leaders finally lifted these prohibitions, it was too late - vivisection was already entrenched in medical and educational institutions.

Estimates of the number of animals tortured and killed annually in U.S. laboratories diverge widely - from 17 to 70 million animals. The Animal Welfare Act requires laboratories to report the number of animals used in experiments, but the Act does not cover mice, rats, and birds (used in some 80 to 90 percent of all experiments). Because these animals are not covered by the Act, they remain uncounted and we can only guess at how many actually suffer and die each year.

The largest breeding company in the United States is Charles River Breeding Laboratories (CRBL) headquartered in Massachusetts and owned by Bausch and Lomb. It commands 40-50 percent of the market for mice, rats, guinea pigs, hamsters, gerbils, rhesus monkeys, imported primates, and miniature swine.

Since mice and rats are not protected under Animal Welfare Act regulations, the United States Department of Agriculture (USDA) does not require that commercial breeders of these rodents be registered or that the USDA's Animal and Plant Health Inspection Service (APHIS) inspect such establishments.

Dogs and cats are also used in experiments. They come from breeders like CRBL, some animal shelters and pounds, and organized "bunchers" who pick up strays, purchase litters from unsuspecting people who allow their companion animals to become pregnant, obtain animals from "Free to a Good Home" advertisements, or trap and steal the animals. Birds, frogs, pigs, sheep, cattle, and many naturally free-roaming animals (e.g., prairie dogs and owls) are also common victims of experimentation. Animals traditionally raised for food are covered by Animal Welfare Act regulations only minimally, and on a temporary basis, when used in, for example, heart transplant experiments; but they are not covered at all when used in agriculture studies. Unfortunately, vivisectors are using more and more animals whom they consider less "cute," because, although they know these animals suffer just as much, they believe people won't object as strenuously to the torture of a pig or a rat as they will to that of a dog or a rabbit.

The National Institutes of Health (NIH) in the United States is the world's largest funder of animal experiments. It dispenses seven billion tax dollars in grants annually, of which about $5 billion goes toward studies involving animals. The Department of Defense spent about $180 million on experiments using 553,000 animals in 1993. Although this figure represents a 36% increase in the number of animals used over the past decade, the military offered no detailed rationale in its own reports or at Congressional hearings. Examples of torturous taxpayer-funded experiments at military facilities include wound experiments, radiation experiments, studies on the effects of chemical warfare, and other deadly and maiming procedures.

Private institutions and companies also invest in the vivisection industry. Many household product and cosmetics companies still pump their products into animals' stomachs, rub them onto their shaved, abraded skin, squirt them into their eyes, and force them to inhale aerosol products. Charities, such as the American Cancer Society and the March of Dimes, use donations from private citizens to fund experiments on animals.

Agricultural experiments are carried out on cattle, sheep, pigs, chickens, and turkeys to find ways in which to make cows produce more milk, sheep produce more wool, and all animals produce more offspring and grow "meatier."

There are many reasons to oppose vivisection. For example, enormous physiological variations exist among rats, rabbits, dogs, pigs, and human beings. A 1989 study to determine the carcinogenicity of fluoride illustrated this fact. Approximately 520 rats and 520 mice were given daily doses of the mineral for two years. Not one mouse was adversely affected by the fluoride, but the rats experienced health problems including cancer of the mouth and bone. As test data cannot accurately be extrapolated from a mouse to a rat, it can't be argued that data can accurately be extrapolated from either species to a human.

In many cases, animal studies do not just hurt animals and waste money; they harm and kill people, too. The drugs thalidomide, Zomax, and DES were all tested on animals and judged safe but had devastating consequences for the humans who used them. A General Accounting Office report, released in May 1990, found that more than half of the prescription drugs approved by the Food and Drug Administration between 1976 and 1985 caused side effects that were serious enough to cause the drugs to be withdrawn from the market or relabeled. All of these drugs had been tested on animals.

Animal experimentation also misleads researchers in their studies. Dr. Albert Sabin, who developed the oral polio vaccine, cited in testimony at a congressional hearing this example of the dangers of animal-based research: "[p]aralytic polio could be dealt with only by preventing the irreversible destruction of the large number of motor nerve cells, and the work on prevention was delayed by an erroneous conception of the nature of the human disease based on misleading experimental models of the disease in monkeys."

The Physicians Committee for Responsible Medicine reports that sophisticated non-animal research methods are more accurate, less expensive, and less time-consuming than traditional animal-based research methods. Patients waiting for helpful drugs and treatments could be spared years of suffering if companies and government agencies would implement the efficient alternatives to animal studies. Fewer accidental deaths caused by drugs and treatments would occur if stubborn bureaucrats and wealthy vivisectors would use the more accurate alternatives. And tax dollars would be better spent preventing human suffering in the first place through education programs and medical assistance programs for low-income individuals--helping the more than 30 million U.S. citizens who cannot afford health insurance--rather than making animals sick. Most killer diseases in this country (heart disease, cancer, and stroke) can be prevented by eating a low-fat, vegetarian diet, refraining from smoking and alcohol abuse, and exercising regularly. These simple lifestyle changes can also help prevent arthritis, adult-onset diabetes, ulcers, and a long list of other illnesses.

It is not surprising that those who make money experimenting on animals or supplying vivisectors with cages, restraining devices, food for caged animals (like the Lab Chow made by Purina Mills), and tiny guillotines to destroy animals whose lives are no longer considered useful insist that nearly every medical advance has been made through the use of animals. Although every drug and procedure must now be tested on animals before hitting the market, this does not mean that animal studies are invaluable, irreplaceable, or even of minor importance or that alternative methods could not have been used.

Dr. Charles Mayo, founder of the Mayo Clinic, explains, "I abhor vivisection. It should at least be curbed. Better, it should be abolished. I know of no achievement through vivisection, no scientific discovery, that could not have been obtained without such barbarism and cruelty. The whole thing is evil."

Dr. Edward Kass, of the Harvard Medical School, said in a speech he gave to the Infectious Disease Society of America: "[I]t was not medical research that had stamped out tuberculosis, diphtheria, pneumonia and puerperal sepsis; the primary credit for those monumental accomplishments must go to public health, sanitation and the general improvement in the standard of living brought about by industrialization."

Concerned people should write to their congressional representatives and demand an end to wasteful and inaccurate animal studies in favor of human-based research and treatments that actually help people. The National Institutes of Health, the world's largest funder of research, must be pushed to fund more preventive programs and human-based research. Meanwhile, avoid purchasing any drug unless absolutely necessary. Remember, the manufacture and sale of pharmaceuticals is big business. If you must take a drug, ask your doctor what clinical studies, not animal tests, reveal about the drug.