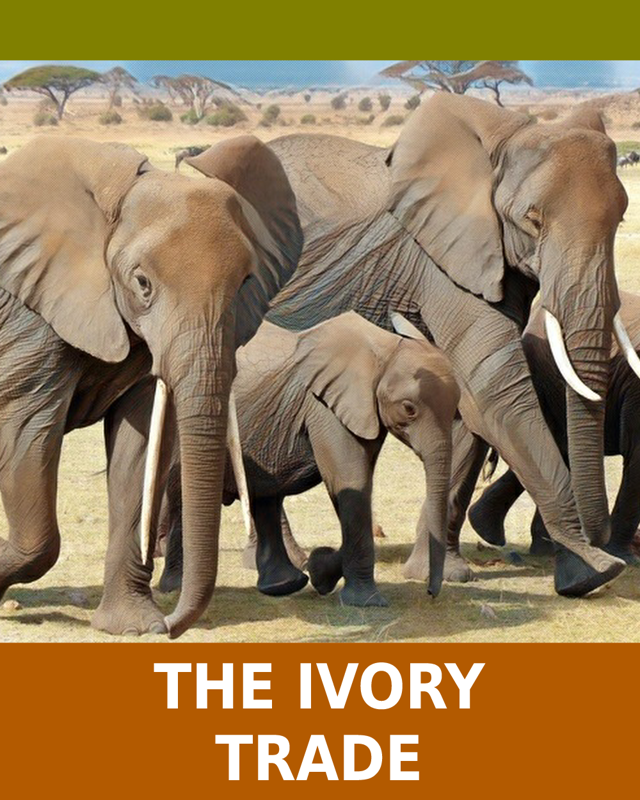 Tens of thousands of elephants are killed every year, one every 15 minutes. Driven by demand for ivory as a symbol of wealth or prestige, the illicit profits of ivory trade finance wars, terrorism, illegal drugs and human trafficing.

Trade in ivory has been around for centuries. It reached its peak when Africa was colonized. This coincided with the industrial revolution in United Kingdom, Western Europe and America creating a vast demand for ivory. It found use in diverse objects like piano keys, billiard balls, ornaments, jewelry, bow clips, hair pins, needles, buttons, etc. The worst and obvious victims of the trade were the elephants.

Entire populations of this beast was wiped out in North Africa about a thousand years ago, before the Europeans came. The colonization period saw the virtual decimation of the elephant in South Africa during the 19th century and West Africa in the 20th century. The two World Wars in the 20th century saw a sharp fall in ivory trade and provided some respite to the elephants. But the rising affluence from Japan's industrial revival, and the burgeoning wealth of the Middle-eastern oil-rich states in the 1970's, brought back a renewed interest in ivory. The affluent middle class in China since the 1990's created another great market for the product.

The Asian elephant's population has witnessed a decline of nearly 50 percent, from over a 100,000 a century ago to just over 50,000 presently. The male elephant carries tusks while the female does not. The tusk can reach a length of 5 feet and weigh up to 47 kilograms. The tusk of the Asian elephant is in demand for products that require intricate carving. Saudi Arabia and the oil-rich Gulf states are some areas where this ivory is in high demand.

The African elephant consists of two subspecies. The forest elephants are shorter and darker than their Savannah cousins. They are found in the central and western equatorial forests of Africa, primarily in Congo. The 1890's and early 1900's witnessed the mass decimation of this animal by the Belgian colonialists when slave labor was extensively used to transport ivory to North African ports for its ultimate destination in Western Europe.

The bush elephant that inhabited the bush areas of Kalahari in Botswana, South Africa and Zimbabwe is another sub-species that was driven to extinction from rampant hunting by the Dutch and British colonialists.

But the main targets of the ivory trade have always been the Savannah elephants, the largest of all species, known for their huge and magnificent tusks. The male tusks can measure up to 7-8 feet and weigh up to 100 lbs. Unlike their Asian counterparts, even the females have tusks. These mighty creatures are often seen in the vast expanses of the Savannah grassland plains straddling Kenya, Tanzania and Uganda. The most shocking decline of this elephant species has been witnessed recently in Tanzania in a span of just six years. The count reduced dramatically from 109,000 to 43,000, which is a devastating drop of 60 percent. The Selous Game Reserve is a gold mine for ivory looters who have accounted for as many as 32,000 Savannah elephant deaths.

There are only about 470,000 elephants roaming the continent of Africa presently. Compare this to 3 to 5 million that roamed the vast expanses at the beginning of the 20th century. It's a frightening drop of 90 percent.

Governments and wildlife agencies have woken up to this terrible loss of wildlife. Virtually every country in the continent, from South Africa to Zimbabwe to Uganda and Tanzania, have placed a ban on ivory trading. Although these bans were put into effect decades ago, only 20 percent of the African elephant habitat is under formal protection.

From over 100 seizures made in the continent in the last 15 years, almost 465,000 pounds of ivory were recovered. That translates into the deaths of over 30,000 elephants. But this hasn't dampened the illegal trade in ivory. Tens of thousands of elephants are lost every year; one killed every 15 minutes.

Organized crime is involved in the transportation of ivory to its preferred destinations, mostly the US and China. The US has put a complete ban on the sale of ivory and ivory items. The immense demand for ornaments and jewelry carved from ivory make China the biggest consumer for the product. Steps have been taken in China to end domestic sales of ivory. In places like Thailand, Malaysia and Indonesia, ivory is in demand for its alleged medicinal properties.

Despite recent efforts, elephant poaching is at its highest level in decades. Valued at US$19 billion annually, illegal wildlife trade ranks fifth globally in terms of value. Domestic ivory markets provides cover for criminals to launder illegal ivory from poached animals. The Internet is utilized for secret, fast and convenient communications and transactions. The criminals that smuggle ivory also smuggle guns, people, and drugs.

Unless the slaughter of elephants is halted, we will likely see these magnificent animals disappear within a few decades. Stopping the crisis will require efforts from a diverse coalition of governments, institutions, organizations, media, scientists, and individuals. 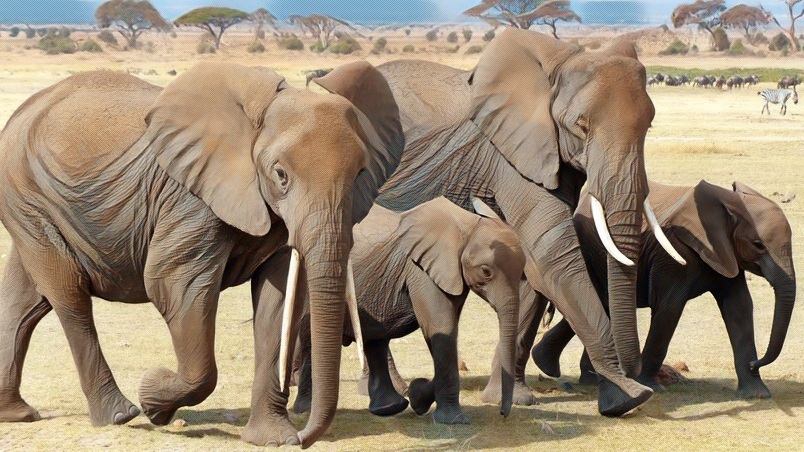 The Evils Of Ivory

Continued high demand for illegal wildlife products has greatly endangered many species like elephants, rhinos, and tigers, leaving some facing imminent extinction. The world is experiencing the worst poaching crisis in history, rivaling that in the 1980s, when more than 800 tons of ivory left Africa every year and the continent’s elephant populations plunged from 1.3 million to 600,000. Scientists estimate that only 430,000 African elephants remain today with one elephant killed every 15 minutes for its ivory.

Poaching is at its highest level in decades. Unless the illegal and inhumane slaughter of elephants, rhinos and other species is halted, we will likely see these magnificent animals disappear from the wild in the next several decades.

As one of the world’s most lucrative criminal activities, valued at US$19 billion annually, illegal wildlife trade ranks fifth globally in terms of value, behind the trafficking in drugs, people, oil and counterfeiting. Research shows that domestic ivory markets provides cover for criminals to launder illegal ivory from poached animals, puts the burden of proof on enforcement officers, and confuse consumers, many of whom take market availability of ivory for legality of the trade.

The rapid development of online media has put a lot of wildlife species at risk and has created huge losses for the global ecosystem and human beings, as criminals have used the Internet for secret, fast and convenient communications and transactions. The report Wanted: Dead or Alive, Exposing the Online Wildlife Trade reveals that over 33,000 endangered wildlife and wildlife parts were available for sale online in a short six-week period.

Ivory trade is quickly pushing endangered animals towards extinction. Every year, 25,000-30,000 African Elephants are poached to supply the ivory trade. According to the Elephant Trade Information System (ETIS), in recent years the volume from large-scale ivory seizures has been setting new records. In 2013, enforcement agencies around the world seized 41.6 tons of ivory, representing a 71 percent increase from 2009.

Research shows that for slow-growing, long-living species like the elephant, when mortality rate reaches 6% the population risks crashing. However in many regions of Africa, elephant populations are declining at a rate of 11%-12% because of ivory trade.

The past 15 years has seen soaring market prices for ivory products, largely due to a growing middle class in China and other Asian countries where ivory products have significant cultural value. Most people don't know that the U.S. is also one of the top consumers of ivory.

Enforcement operations are a deterrent to wildlife criminals in and outside of China. To combat global illegal ivory trade, countries are publicly destroying seized ivory. Kenya, Ethiopia, United Arab Emirates, the Republic of Congo and the United States have torched ivory. Public destruction of confiscated ivory, together with vigorous enforcement, raises the cost for engaging in wildlife crime and warns the public about the criminal nature of ivory trade. Such measures help stigmatize ivory consumption and reduce demand.

The U.S. federal government is working to close the loopholes that have allowed the illegal ivory market to flourish. A number of states have also passed ivory bans, including New York, New Jersey and California.

From African range states, to smuggling transit routes, to consuming countries, actions must be taken on every link of the transnational ivory trade to stop the crisis. Combating illegal ivory trade requires the effort of the whole world.

Urge governments, institutions, organizations, media, scientists, and individuals to work together to stop the ivory trade.