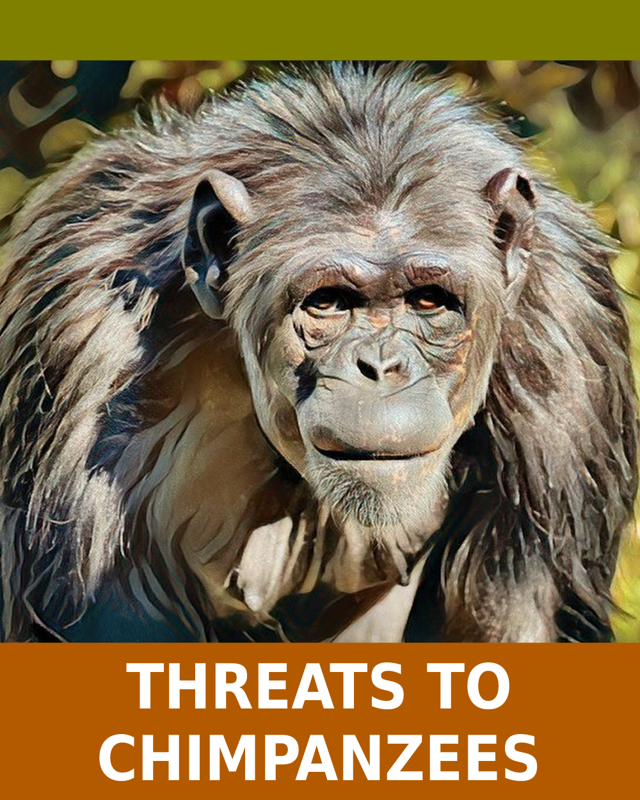 Millions chimpanzees once thrived in the forests of 25 different African nations. Today, their populations have been reduced to only 5 nations and their numbers have plummeted to between 150,000 and 300,000. Without immediate action, humans' closest living relative could be lost in only 15 years.

Humans are largely responsible for chimpanzee population declines. In addition to poaching, which plagues areas of Africa, deforesting and farming are quickly eliminating the habitats of chimps.

Legal and illegal logging is rapidly depleting habitat for chimpanzees. Agriculture is stripping away forests at alarming rates. Changes in climate may be the biggest threat of all to chimpanzees. Climate change is expected to wipe out many forest areas in the coming decades.

The Nigerian chimpanzee dwells in jungles along the Nigeria-Cameroon border. Weighing 70 kilos and reaching heights of nearly 6 feet while fully standing, this species is the most endangered of all the chimpanzee species. There are only 1,500 of them left in the Gashaka-Gumti National Park in Nigeria, a forest reserve.

The Eastern chimpanzee is a native of Central African Republic, Democratic Republic of Congo (DRC), Uganda, Rwanda, Burundi, Tanzania and the southern fringes of South Sudan. They also feature in the 2007 IUCN Red List of most endangered species.

Once a sub-Saharan species found in areas far beyond the Niger River, the Western chimpanzee now lives only in the forests of coastal countries of West Africa like Guinea, Sierra Leone, Burkina Faso, Liberia and Ivory Coast. There are about 20,000 to 55,000 individuals, as per the most recent count.

The Central chimpanzee is a native of Central Africa and can be found in the dense equatorial forests of the Congo River Basin in countries of Equatorial Guinea, Gabon and Congo. They are the most populous of all species, with a count of over 100,000 individuals.

The Bonobo, or the pygmy chimpanzee, is found only in the Democratic Republic of the Congo (DRC). Its habitat is ensconced in the southern bank of the powerful Congo River and has lent this species a different set of characteristics from other chimpanzees. It reaches a standing height of just under 4 feet, weighing in the range of 35 to 60 kilos. Bonobos appear distinctly slender when compared to other chimpanzees. There are about 30,000 to 50,000 of these creatures in their exclusive habitat in the equatorial forests of the southern Congo River basin.

Chimpanzees can adapt to both terrestrial and arboreal environments, but prefer dense forests. It is among trees where they are most at home. Chimpanzees are synonymous with trees, which is one reason why it is so essential to protect the forests they live in.

Logging results in the massive loss of forest cover every year. The growing numbers of poor humans are forced to clear forests to sustain themselves, leading to loss of habitat for the chimpanzees. The hardest hit is the Nigerian-Cameroon species that is on the brink of extinction. Many farmers use agriculture techniques that strip the soil of nutrients and quickly render it unusable, requiring more forests to be cleared.

In Tanzania's Gombe National Park, it’s the influx of refugees from strife-torn regions like Rwanda and Burundi that have taken a toll on the forest cover. The 35-sq-km park is not sufficient to cater to the needs of chimpanzees. Since they are large in size, they need more calories from sufficient food intake than such a restricted habitat can provide. This leads them to venture beyond the precincts of the park in search of food. Raiding nearby farms for maize, vegetables, and sometimes fruit, puts them in direct confrontation with man – a situation that has led to the deaths of many apes. Examples like the Gombe National Park have become widespread throughout the continent and heighten the risk for the chimps' survival.

Population pressure and consequential poverty drive many Africans to hunt for chimpanzee meat. Hunger is one reason. The other is the trade in bushmeat (the meat of wild animals as food). A family that has no sustainable income can live off the bushmeat trade, where they can earn anything from $1,000 - $3,000 in a year. This is more so the case in populous West African countries like Nigeria, Cameroon and Senegal.

Recent research reveals that the biggest threat to chimpanzees could come from climate change. Huge forest areas are likely to be wiped out in the next 50 to 60 years. While those dwelling in the deepest rainforests of Central Africa and DPR may somehow survive, habitats of forest areas of lesser expanse, like the Cameroon-Nigerian mountain jungles, are likely to perish.

Like humans, chimpanzees are susceptible to numerous diseases. Ebola and AIDs are no exception. This is one reason why so many of these animals are inhumanely kept in labs as models for biomedical research. Chimpanzees caged in such lab environments suffer from extreme mental stress emanating from boredom, confinement, and fear of experiments carried out on them.

Chimps may possess numerous traits in common with man, but that does not justify them being made a “pet” or kept in confinement in labs or zoos for man's benefit or entertainment. They must be recognized as creatures of the wild.

We need to conserve our precious forests for the protection of its denizens. Foremost in our minds should be the safeguard of chimpanzees, the most significant link to man's past.

Chimpanzees are more closely related to humans than they are to gorillas. Chimpanzees and humans share 99 percent of their genetic composition. Chimpanzees are highly intelligent, probably more so than human-based tests are able to measure. They make and use tools, cooperate with and learn from each other, and can learn various forms of expression and communication, including American Sign Language and computer symbols. Chimpanzees also have good memories.

Fewer than 250,000 chimpanzees still exist in western and central Africa. Chimpanzees now occupy only a fraction of their former territory. Chimpanzee habitats, already small and isolated, are being further destroyed by increased commercial and agricultural development. In Africa, both species of chimpanzees--pan paniscus and pan troglodytes--are considered endangered. The U.S. Department of the Interior also lists them as endangered.

There are approximately 2,000 captive chimpanzees in the United States. About 300 are in zoos, and the remaining 1,700 were bred for medical research. Many are the offspring of chimpanzees captured in the wild before 1973, when the United States agreed to abide by an international treaty prohibiting the capture and importation of wild chimpanzees.

An estimated 106,000 chimpanzees live in a range of wooded habitats in the wild. They live in 21 African countries and are most concentrated in rainforest areas. They live in social groups, with numbers ranging from just a few to over 60.

Chimpanzee meat is no longer exclusively the food of the forest peoples, but is now commercially available in urban areas too. Bushmeat, including chimpanzee flesh, is also eaten by people in logging camps. The Jane Goodall Institute has very real concerns about the bushmeat trade. They say: "The large-scale commercial bushmeat trade could eradicate all great apes within 10 to 15 years."

CITES prohibits chimpanzees caught in the wild being used in circuses, but in countries where CITES has not been ratified or where it cannot be enforced, chimpanzees may be taken from the wild as infants, which often means the killing of the adults in their group.

Chimpanzees have been used in brain and skull research and in social deprivation studies. Chimpanzees are now popular subjects for AIDS research, although their immune system does not succumb to the virus. Chimpanzees are also used in painful cancer, hepatitis, and psychological tests, as well as for research into artificial insemination and birth control methods, blood diseases, organ transplants and experimental surgery. Their use in military experiments is suspected, but such information is kept secret and is hard to verify. Because they are in short supply, captive chimps are often subjected to multiple experiments, each of which can last an average of two to four years.

Chimpanzees are highly active and very socially oriented. When kept isolated in laboratories with no regular physical contact with either humans or other chimps, they quickly become psychotic.

Because adult chimpanzees are strong and often unmanageable, and because infected chimpanzees cannot be placed in zoos or existing sanctuaries, many chimpanzees are killed before the age of 10. (The normal lifespan of a chimpanzee is 40 to 50 years.) Others, perhaps not as lucky, are kept in tiny cages for decades.

Any increased use of chimpanzees in U.S. laboratories must rely on captive breeding. However, chimpanzees who are taken from their mothers before the age of four or five years seldom develop the social skills necessary for normal breeding. Female chimpanzees do not begin breeding until they are about 12 years old, and thereafter do not breed at all during each baby's four-to six-year infancy. Artificial insemination has increased breeding only slightly. Chimpanzees infected with AIDS, hepatitis or other diseases usually cannot be used for breeding. Unwanted chimpanzees from zoos and circuses are sometimes sold to laboratories.

Chimpanzees are still captured in the wild by poachers who shoot chimpanzee mothers and then take their infants. Many of the captured baby chimpanzees die before they reach a laboratory. Because the adults protect the infants, several adults are sometimes killed to obtain one baby.

During the late 1980s, the National Institutes of Health (NIH) developed its so-called "National Chimpanzee Management Plan." This plan is, in reality, was just a funding mechanism for five breeding colonies to maintain a steady supply of chimpanzees for vivisectors. Under a series of grants, the plan established breeding colonies of chimps at the Yerkes Regional Primate Research Center in Atlanta, the University of Texas in Bastrop, the Primate Foundation of Arizona in Tempe, the University of Southwestern Louisiana in New Iberia, and New Mexico State University (NMSU) in Alamogordo.

The Chimpanzee Management Plan (CMP) also established chimpanzee-related research bases at Yerkes and the University of Texas, as well as at Texas A&M in College Station and at the University of Pittsburgh. The International Species Inventory System monitors the status of all the captive chimps.

In 2013, under intense pressure from organizations and the public, the National Institutes of Health announced it would retain, but not breed, a colony of up to 50 chimpanzees for potential use. The remainder of the chimps would be designated for retirement into the Federal Sanctuary System.

Do not patronize zoos and other forms of animal entertainment.