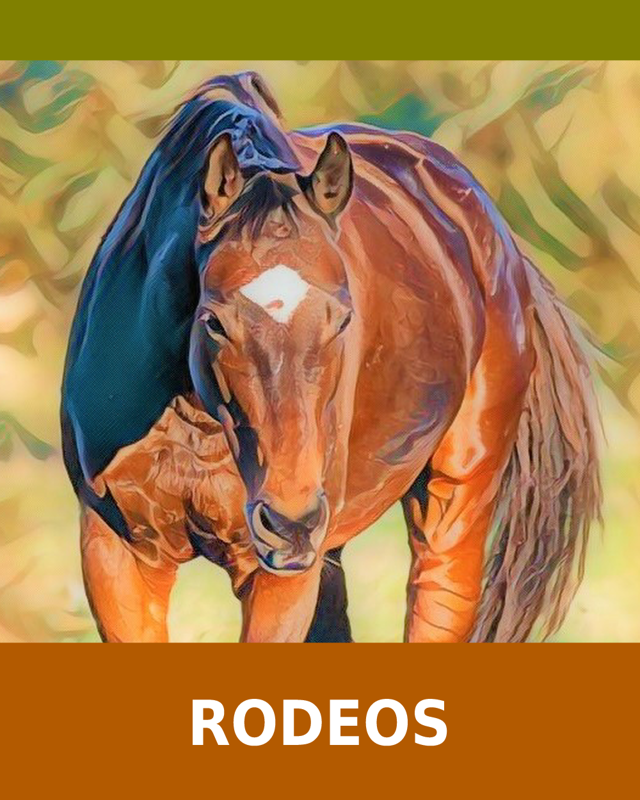 Rodeos are promoted as rough and tough exercises of human skill and courage in conquering the fierce, untamed beasts of the Wild West. In reality, rodeos are nothing more than manipulative displays of human domination over animals, thinly disguised as entertainment. What began in the late 1800s as a skill contest among cowboys has become a show motivated by greed and profit.

The animals used in rodeos are captive performers. Most are relatively tame but understandably distrustful of human beings because of the harsh treatment that they have received. Many of these animals are not aggressive by nature; they are physically provoked into displaying "wild" behavior to make the cowboys look brave.

Electric prods, sharp sticks, caustic ointments, and other torturous devices are used to irritate and enrage animals used in rodeos. The flank or "bucking" strap used to make horses and bulls buck is tightly cinched around their abdomens, where there is no rib cage protection. Tightened near the large and small intestines and other vital organs, the belt pinches the groin and genitals. The pain causes the animals to buck, which is what the rodeo promoters want the animal to do in order to put on a good show for the crowds.

In a study conducted by the Humane Society of the United States, two horses known for their gentle temperament were subjected to the use of a flank strap. Both bucked until the strap was removed. Then several rodeo-circuit horses were released from a pen without the usual flank straps and did not buck, illustrating that the "wild," frenzied behavior in the animals is artificially induced by the rodeo cowboys and promoters of rodeo events.

Dr. C.G. Haber, a veterinarian who spent 30 years as a federal meat inspector, worked in slaughterhouses and saw many animals discarded from rodeos and sold for slaughter. He described the animals as being "so extensively bruised that the only areas in which the skin was attached (to the flesh) were the head, neck, leg, and belly. I have seen animals with six to eight ribs broken from the spine and at times, puncturing the lungs. I have seen as much as two to three gallons of free blood accumulated under the detached skin." These injuries are a result of animals' being thrown in calf-roping events or being jumped on from atop horses during steer wrestling.

Rodeo promoters argue that they must treat their animals well in order to keep them healthy and usable. But this assertion is belied by a statement that Dr. T.K. Hardy, a Texas veterinarian and sometime steer roper, made to Newsweek: "I keep 30 head of cattle around for practice, at $200 a head. You can cripple three or four in an afternoon . . . it gets to be a pretty expensive hobby."

Unfortunately, there is a steady supply of newly discarded animals available to rodeo producers when other animals have been worn out or irreparably injured. As Dr. Haber documented, the rodeo circuit is just a detour on the road to the slaughterhouse.

Although rodeo cowboys voluntarily risk injury by participating in events, the animals they use have no such choice. Because speed is a factor in many rodeo events, the risk of accidents is high.

A terrified, squealing young horse burst from the chutes at the Can-Am Rodeo and within five seconds slammed into a fence and broke her neck. Bystanders knew that she was dead when they heard her neck crack, yet the announcer told the crowd that everything would "be all right" because a vet would see her. Sadly, incidents such as this are not uncommon at rodeos. For example, in 1999, three men and seven horses died at the Calgary Stampede in Alberta, Canada.

In San Antonio, yet another frightened horse snapped his spine. Witnesses report that the horse dragged himself, paralyzed, across the stadium by his front legs before collapsing. During the National Western Stock Show, a horse crashed into a wall and broke his neck, while still another horse broke his back after being forced to buck. Bucking horses often develop back problems from the repeated poundings they endure. Because horses do not normally jump up and down, there is also the risk of leg injury when a tendon tears or snaps.

Calves roped while running up to 27 miles per hour routinely have their necks snapped back by the lasso, often resulting in neck and back injuries, bruises, broken bones and internal hemorrhages. Calves have become paralyzed from severe spinal cord injury, and their tracheas may be totally or partially severed. Even San Antonio Livestock Exposition Executive Director Keith Martin agrees that calf roping is inhumane. Says Martin, "Do I think it hurts the calf? Sure I do. I'm not stupid." At the Connecticut Make-A-Wish Rodeo, one steer's neck was forcefully twisted until it broke. Calves are only used in one rodeo before they are returned to the ranch or destroyed because of injuries. Frequently, animals break loose from their pens and escape. They are often shot by police unfamiliar with and untrained in capturing livestock.

Rodeo association rules are not effective in preventing injuries and are not strictly enforced, nor are penalties severe enough to deter abusive treatment. For example, if a calf is injured during the contest, the only penalty is that the roper will not be allowed to rope another calf in that event on that day. If the roper drags the calf, he or she might be disqualified. There are no rules protecting animals during practice, and there are no objective observers or examinations required to determine if an animal is injured in an event.

If a rodeo comes to your town, protest to local authorities, write letters to sponsors, leaflet at the gate or hold a demonstration. Check state and local laws to find out what types of activities involving animals are and are not legal in your area. For example, a Pittsburgh law prohibiting cruelty to rodeo animals in effect banned rodeos altogether, since most rodeos currently touring the country use the electric prods and flank straps prohibited by the law. Another successful means of banning rodeos is to institute a state or local ban on calf roping, the event in which cruelty is most easily documented. Since many rodeo circuits require calf roping, its elimination can result in the overall elimination of rodeo shows.