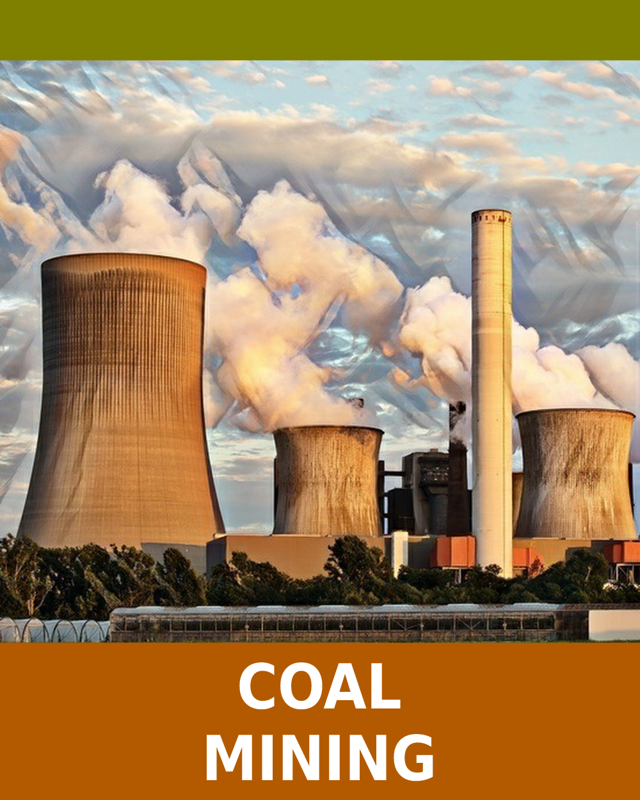 Coal is our most abundant “fossil fuel”. China is now the chief coal producer, followed by the United States. Other major coal producers are Australia and India. Five countries – China, the United States, India, Japan and Russia – account for more than 75% of worldwide coal consumption.
The US has more coal than the rest of the world has oil. There is still enough coal underground in the United States alone to provide energy for the next 200 to 300 years. But coal is far from a perfect fuel. Trapped inside coal are traces of impurities like sulfur and nitrogen. When coal burns, these impurities are released into the air.
While floating in the air, these substances can combine with water vapor (for example, in clouds) and form droplets that fall to earth as weak forms of sulfuric and nitric acid – scientists call it “acid rain.” There are also tiny specks of minerals, including common dirt, mixed in coal. These tiny particles don't burn and make up the ash left behind in a coal combustor. Some of the tiny particles also get caught up in the swirling combustion gases and, along with water vapor, form the smoke that comes out of a coal plant's smokestack.
Also, coal, like all fossil fuels, is formed out of carbon. All living things, even people, are made up of carbon. But when coal burns, its carbon combines with oxygen in the air and forms carbon dioxide. Carbon dioxide is a colorless, odorless gas, but in the atmosphere, it is one of several gases that can trap the Earth's heat. Many scientists believe this is causing the Earth's temperature to rise, and this warming could be altering the Earth's climate.

Threats To Wildlife From Coal Mining

Surface mining of coal is the method resorted to by the industry when coal deposits are found just below the Earth's surface. This happens to be the most used mining methodology of coal world over and has a direct and negative effect on ecosystems, environment and wildlife of places where such activity is carried out.
Excavation of the soil and heaping of spoils damages the Earth's surface beyond repair and causes decimation and displacement of wildlife species. It's worse for sedentary species like reptiles, small mammals, beavers and burrowing rodents, all of whose primary habitat is the Earth's surface.
Pollution of aquatic habitats is another outcome of surface mining for coal. Wastes and chemicals from it trickle and seep into streams, rivers and underground water-bodies. As a result, effects are manifested in places that are far away from mining sites. Most damaging are the kinds of chemicals pumped into the ground through pipes – mercury, methyl-mercury, cyanide and arsenic.
Mercury contamination is one of the most detrimental outcomes of coal mining. In the North-east mountain ranges of the US, it's been known to contaminate fresh-water lakes and in turn affect fish and fish-eating birds while damaging their neurological and reproductive systems. Studies show that 92 species from 11 North-Eastern states from Maine to Virginia are vulnerable to mercury contamination.
The wetlands that support a vast array of bird-life are especially open to one of the worst forms of pollution – methyl-mercury poisoning. Air pollution arising out of coal mining can quickly acidify water bodies. It hastens the process by which bacteria convert inorganic mercury from coal into organic methyl-mercury. Bogs, coastal marshes, beaver ponds, foggy mountaintops and forest floors are all absorbers of methyl-mercury. From such wetlands, it permeates into terrestrial grounds and this can corrupt an entire food web. Biomagnification takes over, and with each step of the food chain concentrations of mercury rise. This happens when creatures in these wet habitats feed on plant debris containing mercury, allowing it to enter terrestrial food sources. Rusty blackbirds and Saltmarsh sparrows have shown the highest levels of mercury contamination. Mercury poisoning of Virginia water-bodies threaten to hamper the Saltmarsh sparrow's ability to choose safe nesting sites.
Small traces of methyl-mercury, that were previously ignored as being harmful, have now revealed the adverse effects it can have on reproduction of species. Just a minuscule amount of 1.2 parts per million of methyl-mercury found in the blood of the Carolina wren have accounted for a 20 percent drop in their reproductive capacities. The wrens are scavengers and glean the forest floors for spiders, which too are contaminated.
Most surprising is the case of the tiny Dome Island in the middle of the pristine Lake George in the uplands of New York State. This untouched 16-acre island in the Adirondack region is considered to be a conservation gem and is home to species of songbirds like the red-eyed vireos, black-capped chickadees and song sparrows that flutter among ancient cedars, beech, hickory and oak. Shockingly, these birds have revealed the highest concentrations of mercury in the North-east region. They are victims of airborne mercury pollution. Almost 50 tons of neurotoxins are belched into the atmosphere annually by coal-based power plants in the US. This “atmospheric deposition” of mercury is a global hazard, but is more pronounced in the bio-diversity rich hotspots that lie downwind to coal-burning epicenters of Ohio, Illinois, Pennsylvania and Indiana.
Wanton mining practices elsewhere in the world have results in coal fires that can burn for decades, as in the case of numerous mines in Eastern India. It releases fly ash into the atmosphere, along with smoke full of toxic chemicals and greenhouse gasses. Coal mine methane, a greenhouse gas emitted by mining of the mineral, is 20 times more toxic than carbon dioxide.
In China, even though 95 percent of the mines are underground, the threat of a methane outburst always looms.
Other problems that have environmental consequences are coal storage piles or waste piles. These afflict countries like China, Russia, the US, Indonesia, Australia and South Africa in a considerable way.
The biggest threat to the environment comes from countries with huge reserves of coal. A fear for these countries is there could be alternative sources of energy in the future that could replace a fossil-fuel like coal. So the idea of mining and finishing whatever stocks of coal remain before such a replacement happens weighs heavily on the minds of policy makers. Hence the near-frenetic activity in coal mining in places like India and China. Also, both depend heavily on this mineral to make-up for the huge shortfall in oil to meet their ever-growing energy needs.

Coal is an abundant fuel source that is relatively inexpensive to produce and convert to useful energy. However, producing and using coal impacts the environment.
Climate change is one of the greatest environmental challenges we face. Climate impacts affect the entire planet. Unchecked carbon pollution leads to long-lasting changes in our climate, such as rising global temperatures; rising sea level; changes in weather and precipitation patterns; and changes in ecosystems, habitats and species diversity. These changes threaten human and wildlife health and welfare.
Environmental risks include more heat waves and drought; worsening smog (also called ground-level ozone pollution); increasing the intensity of extreme events, like hurricanes, extreme precipitation and flooding; and increasing the range of ticks and mosquitoes, which can spread disease such as Lyme disease and West Nile virus.
Overwhelmingly, the best scientists in the world are telling us that our activities are causing climate change – based on troves of data and millions of measurements collected over the course of decades on land, in air and water, at sea and from space.

Most of the coal consumed is used as a fuel to generate electricity. Burning coal produces emissions that adversely affect the environment and human health.
There are several principal emissions resulting from coal combustion:

Coal not only pollutes our skies and fuels climate change, it also deprives us of our most precious resources: water. The world’s rapidly dwindling freshwater resources could be further depleted if plans for hundreds of new coal power plants worldwide go ahead, threatening severe drought and competition.
If all the current proposed coal plants are allowed to be built, the water consumed by coal power plants around the world would almost double. Globally, coal power plant units already consume enough water to meet the basic water needs of 1 billion people. A quarter of the proposed new coal plants are planned in regions already running a freshwater deficit, where water is used faster than it is naturally replenishing.
Coal is one of the most water-intensive methods of generating electricity. According to the International Energy Agency, coal will account for 50% of the growth in global water consumption for power generation over the next 20 years. Research shows that if the proposed coal plants come online, their consumption of water will increase by 90%.

America has more coal than any other fossil fuel resource. The United States also has more coal reserves than any other single country in the world. In fact, just over 1/4 of all the known coal in the world is in the US. The United States has more coal that can be mined than the rest of the world has oil that can be pumped from the ground. Currently, coal is mined in 26 of the 50 states.
The Bureau Of Land Management (BLM) has responsibility for coal leasing on approximately 570 million acres where the coal mineral estate is owned by the Federal Government. The surface estate of these lands could be controlled by BLM, the United States Forest Service, private land owners, state land owners, or other Federal agencies. BLM receives revenues on coal leasing at three points: a bonus paid at the time BLM issues the lease; an annual rental payment of $3.00 per acre or fraction thereof; and royalties paid on the value of the coal after it has been mined. The Department of the Interior and the state where the coal was mined share the revenues.
Surface mines (sometimes called strip mines) are the source of about 65% of the coal that is mined in the US. These mining operations remove the soil and rock above coal deposits, or seams. Mountaintop removal and valley fill mining has affected large areas of the Appalachian Mountains in West Virginia and Kentucky. In this form of coal extraction, the tops of mountains are removed using explosives. As a result of this technique, the landscape is changed, and streams may be covered with rock and dirt. The water draining from these filled valleys may contain pollutants that can harm aquatic wildlife downstream. Although mountaintop mining has existed since the 1970s, its use became more widespread and controversial beginning in the 1990s.
Underground mines have less of an impact on the environment compared to surface mines. The largest impact of underground mining may be the methane gas that must be vented out of mines to make the mines a safe place to work. Methane is a strong greenhouse gas, meaning that on an equal-weight basis its global warming potential is much higher than other greenhouse gases. Surface mines contributed about 2% of total US methane emissions. The ground above mine tunnels can also collapse, and acidic water can drain from abandoned underground mines.
Using public lands for coal mining poses a significant threat to natural heritage. Coal mining dramatically alters the landscape, destroys wildlife habitat, causes erosion, and leads to the deterioration of drinking water.

The ecological devastation from coal activities is disturbing. Urge your local, state and federal government officials that action needs to be taken. Innovative technologies for improved mining and processing must be a priority to respond better to global environmental challenges, while governments and private sectors need to shift to alternative energy sources.
How You Can Help Animals