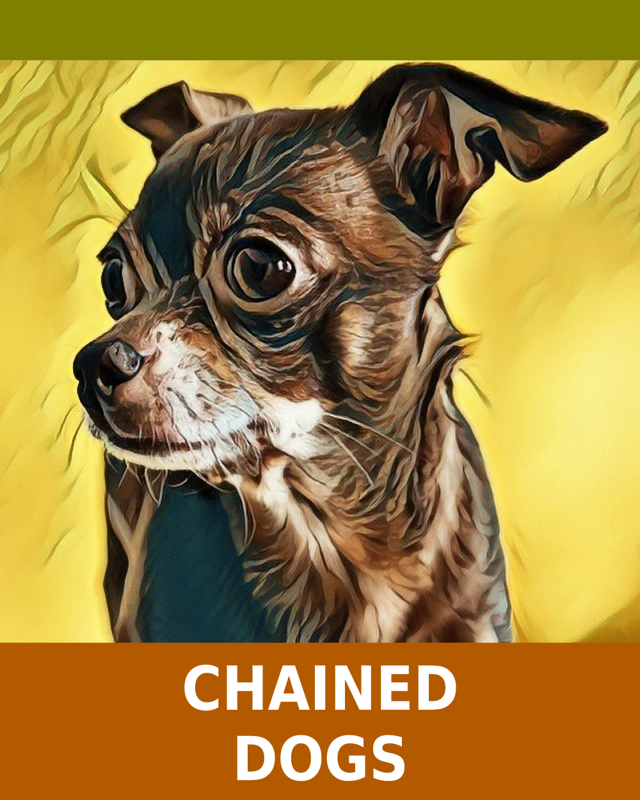 Imagine sitting in a yard, tethered in place, with nothing to do and no chance to go anywhere. Day after day. Alone. That's what chaining is like. Chaining means confining a dog with a tether attached to a dog house or a stake in the ground. It is one of the common forms of animal cruelty.

Chaining is a widespread practice and - as with many historical injustices - this may cause people to assume it is acceptable. In fact, it is an improper way to confine a dog, with negative effects on the dog's health, temperament and training. A chained dog's life is a lonely, frustrating, miserable existence, without opportunities for even the most basic dog behaviors of running and sniffing in their own fenced yard. Dogs chained for even a few weeks begin to show problems.

Virtually every dog that spends most of the day on the end of a chain will show temperament problems - no surprise to those who understand canine behavior. Chaining, by definition, keeps a dog in solitary confinement, continually thwarting its pack instinct to be with other animals or with its human "pack." The dog is usually chained away from the house and has human contact only at feeding time. Those dogs lucky enough to be brought inside at night are usually deposited in the basement or other areas away from the family living quarters. These dogs are so desperate for human contact that when they are finally released from their chains, they behave in such an unruly manner that they are disciplined and quickly dispatched to another isolated area. Some of the saddest situations are those where the family children run and play in the yard just outside the reach of a chained dog. The dog is desperate to play with the children, but their only exposure to the dog is to be jumped on, so they carefully stay just out of reach - only increasing the dog's frustration.

The most common problem resulting from chaining is hyperactivity, particularly in young dogs. The chained dog is continually frustrated by having their movements restricted. The dog runs to the end of the tether and soon learns that he will be jerked back to the perimeter allowed by the chain. When the dog is finally released, he runs away, jumps on or over anything in his way, and is unresponsive to verbal commands. His behavior frustrates the guardian, who puts the dog back on the chain because the dog doesn't know how to behave! The cycle of suffering continues with the dog becoming even more uncontrollable and the human less willing to deal with the hyperactive behavior.

Fear biting and aggression are other common behaviors of chained dogs. The dog seems to know that he cannot escape danger, so he resorts to displaying aggressive behavior. And such dogs have good reason to be aggressive. Chained dogs in urban backyards often serve as targets for gun-toting, rock-throwing individuals who pass through the alleys. It is not surprising that chained dogs are so quick to bite while also displaying timid, fearful behavior when handled.

A dog that has been chained all day or all week has little interest in learning to come when her guardian calls. The dog is interested in running as fast as she can away from her human and confinement. This hyperactive behavior causes the uneducated person to believe he has a "dumb" dog. The guardian then may give up on even limited interaction with the dog, and either leave the dog tied up in permanent misery or get rid of her. People tend to train and care for dogs in the way they saw their parents perform this task. As a result, many people chain dogs because that's what they've been taught, passing on this cruel practice without any real understanding of canine behavior.

When you see a dog house with a circle of dirt around it, you know you are looking at the "home" of a chained dog. The area where the dog can move about becomes hard-packed dirt that carries the stench of animal waste even if the dog’s guardian frequently picks up the fecal matter. The odor of waste draws flies, which bite the dog's ears, often causing serious bloody wounds. Dogs that have been chained for several years often lose portions of their ears, as more tissue is lost each summer from fly bites. Control of internal parasites is more difficult because the chained dog is always close to his own fecal matter and can re-infest himself by stepping in or sniffing his own waste. Also, the dog is forced to have almost continual contact with the ground in the chaining area, which may have a high concentration of parasite larvae.

The final word is that chaining doesn't work - except to serve as a form of confinement that is easy for the human but cruel for the animal. Chained dogs are miserable, and their guardians are often frustrated. Chaining is not an acceptable practice. It's a long-overlooked form of cruelty that must be stopped.

If you have a chained dog, bring your dog inside. Dogs get bored and lonely sitting on the same patch of dirt day after day, year after year. Dogs want to be inside the house with their "pack": you!

Get to know the dog’s guardian if you are concerned about someone else’s chained dog.

Call your local animal control office, humane society, or sheriff’s department if you see a dog who is: consistently without food, water or shelter; sick or infested with parasites; too skinny. A city/county official or humane society investigator is required to investigate the situation if the dog guardian is breaking your community’s animal cruelty law. In most communities, it is considered cruel to leave a dog without food, water or shelter; to not provide medical care to a sick dog; and to keep a dog undernourished. Even if your city's ordinance doesn’t have an animal cruelty section, your state law will have a section that addresses animal cruelty. Your state laws are online: do a keyword search for "Your State Code" or "Your State Statutes." Once you report the situation, don’t be afraid to follow up! Keep calling the authorities until the situation is resolved. If animal control doesn't respond, write a letter describing the situation to your mayor. The dog is counting on you to be his voice.

Offer to buy the chained dog from the family. Just say something like, "I saw your dog and have always wanted a red chow. Would you sell him to me for $50?" You can then place the dog into a good home. Although some chained dogs are aggressive and difficult to approach, many are very friendly and adoptable. Don't offer to buy the dog if you think that the guardian will just go right back out and get another dog.

If you insist on keeping your dog outside, put up a fence. Fences give dogs freedom and make it easier for humans to approach their dogs, since they won't be jumping at the end of a chain. Fences don’t have to cost much if you do some work yourself. You can attach mesh fencing to wooden or metal posts for the cheapest fence. Chain link is easy to install, too. Put up a trolley if you can't put up a fence. A trolley system is cheap and will give the dog more freedom than a chain.

Spaying and neutering will help the dog calm down and stay closer to home. A sterilized dog won’t try to escape to find a mate! Sterilization is healthy for your dog: it reduces his or her risk of getting certain types of cancer. Sterilization won't change your dog's personality. Sterilized dogs still make great guard dogs.

Replace old collars with a new nylon collar. You should be able to easily fit two fingers between the dog's neck and the collar. If you need to add a hole to a collar, hammer a thick nail through it, or heat a pick and poke it through.

Provide food and fresh water every day. Every time you eat, your dog needs to eat. Put a water bowl in a tire or hole in the ground to keep it from tipping. You can attach a water bucket to a wooden doghouse or fence. Stretch wire, a small chain, bungee cord or twine across the bucket and secure on either side.

Provide good shelter. The best shelter is your home. If you feel you must keep your dog outside, you can buy dog igloos pretty cheaply from discount stores, farm supply stores and hardware stores. If you can’t afford to buy a doghouse, you can make one. Doghouses should be large enough for the dog to stand up and turn around in, but small enough to retain body heat. Wooden doghouses should be raised a few inches off of the ground to prevent rotting and keep out rain. Flat, concrete blocks are an easy way to raise a doghouse.

Give toys and rawhides. Dogs like to play, just like kids do. A big rawhide, which you can get at the grocery, will give your dog several hours of fun. Even a knotted towel or ball can be fun for your dog!

Go on walks! Your dog will be so happy to get out of the yard, see new things, and smell new smells! Walking is great exercise for both of you. If your dog is very strong or large, use a harness to make walking easier. If the dog belongs to someone else, offer to walk the dog yourself.

Go to school! Obedience classes can help your dog learn to be a good “inside” dog.

Protect from fleas and worms. Biting fleas make a dog’s life miserable. You can buy flea treatment at grocery, discount and pet supply stores. Most farm supply stores sell wormers and vaccinations at much cheaper prices than vets.

Protect from winter cold. Dogs get cold in the winter just like we do. If it's too cold for you to sleep outside, your dog is going to be cold outside, too. It is inhumane to keep an animal outside during frigid temperatures. If you feel you can’t bring your dog in, fill doghouses with hay or cedar chips to help retain heat. (Cedar chips are better because they are less likely to rot and don't contain mites.) You can get cedar shavings and hay at farm supply, hardware, discount, and home improvement stories. If you use hay and it gets wet and soggy, spread it in the sun to dry. To keep cold air out, the door should be covered with a plastic flap. You can use a car mat, a piece of plastic carpet runner, or even a piece of carpet. Dogs need more food in winter, as keeping warm consumes calories. Check your dog's water bowl several times daily to be sure it isn't frozen.

Provide shade and a kiddie pool in the summer. A doghouse isn’t the same thing as shade. Doghouses get very hot in summer! Bring your dog in during heat waves. Plant trees or create shade by stretching a tarp between two trees. Dogs enjoy cooling off in a pool as much as we do.

Educate people about chaining! Keep educational brochures and flyers in your car.

If you can't find solutions to make your outside dog an inside dog, find your dog a new home. Tethering a dog is inhumane. Do the right thing: bring your dog inside, or find another family that will.