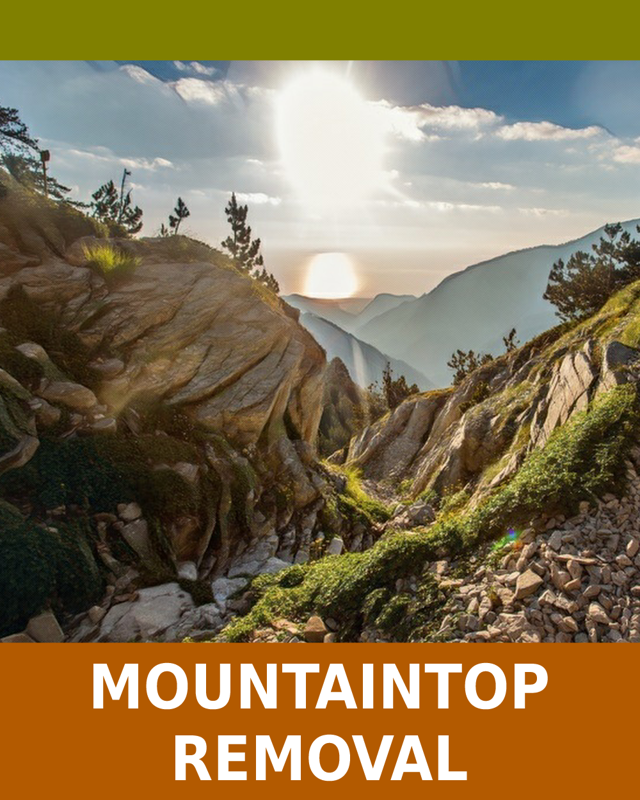 Hundreds of mountain peaks in Appalachia have been destroyed through the practice of mountaintop removal (MTR) coal mining. Trees are clearcut, and explosives and massive machines are used to remove earth and access coal seams from the top down. Mining waste, or “spoil,” is dumped into valleys. The landscape is altered forever in one of the nation’s main hotspots of biological diversity. Natural habitats in some our country's most important forests are laid to waste. There is no justification for blowing up the oldest mountains on the continent.
MTR mining is controversial for its devastating environmental impacts. Research studies have linked these environmental impacts to adverse outcomes in community health, raising questions about whether the benefits of MTR mining come at too high a health cost.
Coal companies use explosives to blast as much as 800 to 1,000 feet off the tops of mountains in order to reach thin coal seams buried deep below. To annihilate an entire mountainside, trees are ripped from the ground and brush is wiped away with huge tractors. The trees and brush are then set ablaze while deep holes are dug for explosives. Explosives are poured into the holes to literally blow mountaintops apart. Draglines, giant machines that can be the size of an entire city block, scoop dirt and rocks into nearby valleys and streams. Waterways are forever buried beneath the rubble.
“Spoil”—the earth and rock dislodged by mining—buries thousands of miles of headwater streams that ultimately feed the Mississippi River. Slurry, the residue from cleaning the coal, is impounded in ponds or injected into abandoned underground mine shafts where it can leach potentially toxic constituents such as arsenic, lead, manganese, iron, sodium, strontium, and sulfate that ultimately may end up in groundwater.
A form of surface mining, MTR mining first emerged in the late 1960s but remained a small source of coal until the mid-1990s. Now it is a major form of coal mining in West Virginia and Kentucky—the second and third largest coal-producing states after Wyoming—and it also occurs in Virginia and Tennessee. MTR mining uses less labor than underground mining, with massive draglines able to move 100 cubic yards of earth in a single scoop. And with underground coal supplies significantly depleted, MTR mining allows the harvest of seams of coal too thin to work from traditional coal mines.

While mountaintop removal sites must be “reclaimed” by law after mining is complete, reclamation usually focuses on stabilizing rock formations and controlling erosion. The reforestation of the affected area is seldom achieved. Most flattened mountaintops receive little more than a spraying of exotic grass seed. The non-native flora provide vegetation but compete with tree seedlings that have difficulty establishing roots in the compacted backfill.
Coal companies often receive waivers following claims that economic development will occur on the destroyed mountaintop. But despite the promotion of reclaimed flat land for economic development, only a very small percentage of sites are developed.
According to the U.S. Environmental Protection Agency, it may take hundreds of years for a forest to re-establish itself on a removed mountain site.

Pollutants may take any of several pathways into an area’s water supply. Some may leach into streams from the overburden that is dumped into valleys. Others hitch a ride in the slurry that is frequently injected directly into old mine shafts or impounded in ponds, from which it can seep through coal seams into ground-water. Where pollutants go once they hit groundwater is not easily predicted. Appalachian hydrology is complex and poorly charted. But severely contaminated water supplies have been the basis for multiple lawsuits against coal companies, alleging adverse health effects arising from contaminated drinking water. Residents may suddenly find that their water suddenly goes bad after mining begins nearby. One of the biggest health complaints is unremitting diarrhoea. Other conditions reported include learning disabilities, kidney stones, tooth loss, and some cancers.
Water contamination is not the only concern for communities. Residents quickly become accustomed to the rotten-egg scent of hydrogen sulfide. The sulfide is produced when bacteria reduce sulphate that presumably comes from mining runoff. Sulphide has always been recognized as an occupational hazard. Sulphide interferes with oxidative metabolism, and cardiac and nervous tissues are particularly sensitive, according to the World Health Organization. Chronic inhalational exposure in occupational settings has been shown to cause headache, irritability, and poor memory.
Another potential hazard is coal dust from both mining and processing the coal. The coal is crushed or pulverized, and that releases particulate matter into the air. Potential impacts from coal dust exposure include cardiovascular and lung disease, and possibly cancer.
The Clean Water Act specifies that streams must be suitable for “designated uses,” which include recreation, consumption of fish by humans, and protection of the health of aquatic life. However, health studies that have been conducted in Appalachia have revealed direct and indirect links to MTR mining. An investigation found that ecological impairment of streams correlated with human cancer mortality rates in surrounding areas. Three studies showed strong associations between MTR mining and increased cardiovascular disease, increased frequency of birth defects, and reduced quality of life.
Residents in mountaintop mining counties have 18 more unhealthy days per year than those in other non-mining counties, according to research. Over a life span of 78 years, that adds up to nearly 4 additional years’ worth of impaired mental and/or physical health.
The evidence that MTR mining may directly and adversely affect public health continues to become significantly stronger. Scientists say more research may still be needed, but the time has come to shift the burden of proof to the mining companies.

Mountaintop removal coal mining, which as its name suggests, involves removing all or some portion of the top of a mountain or ridge to expose and mine one or more coal seams. The excess overburden is disposed of in constructed fills in small valleys or hollows adjacent to the mining site.
The U.S. Environmental Protection Agency has determined that mountaintop mines and valley fills lead directly to five principal alterations of stream ecosystems:
- springs and ephemeral, intermittent and perennial streams are permanently lost with the removal of the mountain and from burial under fill
- concentrations of major chemical ions are persistently elevated downstream
- degraded water quality reaches levels that are acutely lethal to organisms in standard aquatic toxicity tests
- selenium concentrations are elevated, reaching concentrations that have caused toxic effects in fish and birds
- macroinvertebrate and fish communities are consistently degraded.
In addition, six potential consequences of environmental impacts of mountaintop mines and valley fills operations include:
- loss of headwater resources
- impacts on water quality
- impacts from aquatic toxicity
- impacts on aquatic ecosystems
- cumulative impacts of multiple mining operations
- effectiveness of on-site reclamation and mitigation activities.
Mining operations are regulated under the Clean Water Act (CWA), including discharges of pollutants to streams from valley fills (CWA Section 402) and the valley fill itself where the rock and soil is placed in streams and wetlands (CWA Section 404). Coal mining operations are also regulated under the Surface Mining Control and Reclamation Act of 1977 (SMCRA).
EPA, in conjunction with the US Army Corps of Engineers, the US Department of the Interior's Office of Surface Mining and Fish & Wildlife Service, and the West Virginia Department of Environmental Protection, prepared an environmental impact statement looking at the impacts of mountaintop mining and valley fills. This was done as part of a settlement agreement in the court case known as Bragg v. Robertson, Civ. No. 2:98-0636 (S.D. W.V.). The purpose was to evaluate options for improving agency programs that will contribute to reducing the adverse environmental impacts of mountaintop mining operations and excess spoil valley fills in Appalachia. The geographic focus was approximately 12 million acres encompassing most of eastern Kentucky, southern West Virginia, western Virginia, and scattered areas of eastern Tennessee.

Based on studies of over 1200 stream segments impacted by mountaintop mining and valley fills the following environmental issues were noted:
- an increase of minerals in the water - zinc, sodium, selenium, and sulfate levels may increase and negatively impact fish and macroinvertebrates leading to less diverse and more pollutant-tolerant species
- streams in watersheds below valley fills tend to have greater base flow
- streams are sometimes covered up
- wetlands are at times inadvertently, and other times intentionally, created; these wetlands provide some aquatic functions, but are generally not of high quality
- forests may become fragmented (broken into sections)
- the regrowth of trees and woody plants on regraded land may be slowed due to compacted soils
- grassland birds are more common on reclaimed mine lands as are snakes; amphibians such as salamanders, are less likely.
Cumulative environmental costs have not yet been identified.
In addition to health and environmental concerns, social, economic and heritage issues are created by mountaintop removal.

Regulation Is Not The Answer

Mountaintop removal is not necessary. It provides only a fraction of national coal production — an estimated 5-7 percent. It does not increase employment in Appalachia. Coal mining jobs have actually disappeared or been displaced as a result of heavily mechanized strip mining.
When the forests are gone and the streams destroyed, all the unique and diverse plant and animal species are destroyed with them. Irreplaceable ecosystems are being wiped out.
Decades of irreversible damage clearly show that regulatory compromises are no longer sufficient. Mountaintop removal mining is a crime against nature, wildlife and human health. It must be abolished, not regulated.

The ecological devastation from mountaintop removal is disturbing. Urge your local, state and federal government officials that action needs to be taken. Innovative technologies for improved mining and processing must be a priority to respond better to global environmental challenges, while governments and private sectors need to shift to alternative energy sources.
How You Can Help Animals