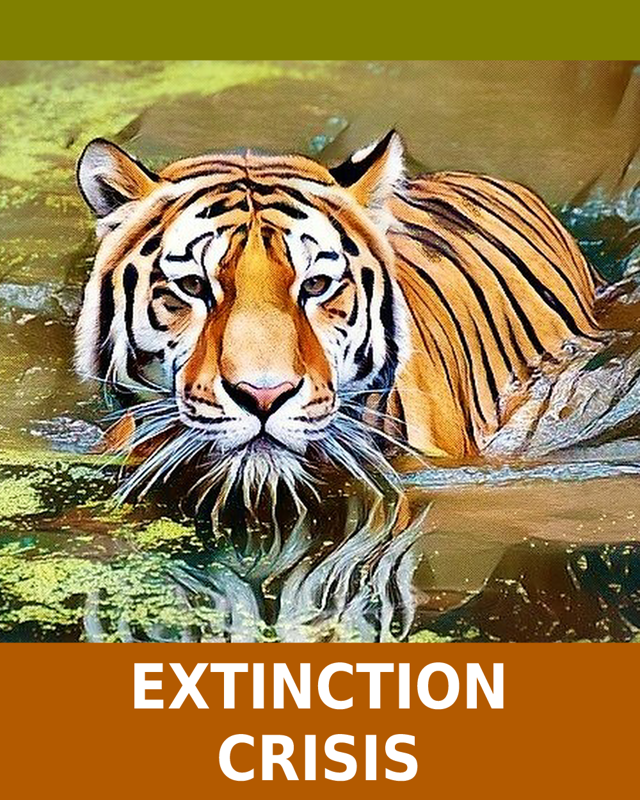 It's a dreadful reality. We are going through our sixth period of plant and animal mass extinction, the sixth to happen in the last 500 million years. The current wave is considered to be the worst series of species elimination since the dinosaurs disappeared 65 million years ago. Granted, extinction is a phenomenon that occurs naturally, however it normally happens at a rate of 1 to 5 species every year. But, as scientists estimate, we are currently losing species 1,000-10,000 times faster than that, which means that literally tens of species are vanishing from the face of the Earth every day. We could be looking at a frightening future. By this rate, almost one third to one-half of all species could become extinct by 2050.
The difference with past extinctions, which were caused by catastrophic natural phenomena like volcanic eruptions, asteroid strikes, and violent climate changes, is that the current crisis is caused almost entirely by humans. As a matter of fact, as many as 99% of the species at the threshold of extinction are there due to human activities, particularly the ones that drive the introduction of exotic species, loss of habitat, and global warming. With the increasing rate of change in our biosphere, coupled with the fact that every species’ extinction may trigger a cascade of subsequent extinctions due to inter-species dependence in the complicated web of the ecosystem, it’s not unlikely that extinction numbers in the future will increase exponentially.
The variety of species safeguards the resilience of the ecosystem, providing ecological communities the breadth needed to endure stress. Although the efforts of conservationists are often focused on ecosystems with high numbers of species, like coral reefs and rainforests, preserving biodiversity must not leave other habitats with fewer species out, like tundra, grasslands, and polar seas. Devastating consequences stem from any species loss. What’s more, most of the focus regarding extinction is on what’s happening globally, but the vast majority of biodiversity’s advantages are seen locally. Keeping local populations safe is the sole way of ensuring a species’ survival in the long term, via the maintenance of genetic diversity.
Over the last 500 years, as many as one thousand species vanished, without even accounting for many thousands more that went extinct before science discovered and described them. Almost 38% of all known species on a global scale are on the verge of extinction. This puts many thousands of unique species in the dire position of being gone forever.

Amphibians have the sad privilege of being endangered more than any other animal group. At least 30 percent of all amphibian species are now threatened to disappear. Toads, frogs, and salamanders are vanishing due to animal agriculture, habitat loss, air and water pollution, global warming, UV light exposure, disease, and the introduction of exotic species. Because this group of animals is overly sensitive to environmental change, they should be regarded as the canary in the global coal mine. Amphibians alert us to minor but definite changes in the ecosystem that could lead to the extinction of many more species, not excluding humans.

Birds are present in almost all habitats on earth and are usually the most familiar and visible wildlife to people all over the world. Because of this, they may act as a significant indicator for monitoring how the biosphere changes. Diminishing bird populations in the majority of habitats are the sad confirmation that major changes are taking place on Earth because of our activities. More than 12% of currently known species of birds are at the threshold of extinction. The biggest impact on bird population has been caused by degradation and loss of habitat, with collectors’ activities and invasive species following closely.

Probably the most characteristic element of the current extinction crisis is that most of our primate relatives are in serious danger. Almost 90% of the primate population lives in the tropical forest, which are disappearing fast due to animal agriculture, deforestation and development. About half of all the primate species on Earth are at the brink of extinction. 50 percent of all known mammals see rapidly decreasing populations, and almost 20 percent are close to extinction. Marine mammals – including dolphins, whales, and porpoises – are particularly close to becoming extinct.

Plants are the food we consume and the producers of the oxygen we breathe through the process of photosynthesis. Most of the life on Earth is dependent on plants. Moreover, the majority of medicines are plant-based or plant-derived. Almost 70 percent of known plant species are on the verge of extinction. Unlike animals, plants cannot migrate to a different habitat when threatened, which makes them all too vulnerable. Plant extinction is expected to dramatically increase due to animal agriculture and global warming. The distribution and range of plants worldwide is changing immensely due to the rising temperatures. Since plants form the basis of all ecosystems and the foundation of the food chain, this will affect every species that depends on them for shelter, food, and survival.

Conservation of endangered species may sound like a job for politicians and scientists. A problem of such proportions seems impossible to be tackled by the average person. But you can make a significant impact by adopting some simple habits; and if we all do the same, we have the power to protect endangered animals all over the world. Here are 10 ways you can make a difference for endangered species:
Reduce And Reuse
Reuse items in your household when you can, and buy products that produce less packaging waste. By purchasing second-hand furniture, clothes, electronics, and toys, you help reduce the energy consumption required to make new ones and produce less waste as well. Choose reusable bottles for beverages whenever you can. Use a reusable bag for your groceries, and carry your own container to the restaurant for the leftovers.
Don’t Use Harsh Chemicals In Your Household
Toxic chemicals used in laundry, housecleaning, dish washing and personal care products end up in underground waters, poisoning aquatic life and any animals that feed on them. Choose non-toxic products, or make your own.
Dispose Of Waste Properly
Recycle plastics, paper, metal cans and glass. When you take out your trash, see that the bag is sealed safely so you don’t litter by accident. Dangerous compounds such as car fluids, paint, bleach, batteries, pesticides, and other chemical substances should be disposed of properly at a specialized facility.
Prevent Soil Erosion
Take all necessary measures to prevent soil erosion and protect water resources close by used by wild animals. When you clear out vegetation, you must take all necessary precautions that any loose sediment is kept away from natural waterways, as it would consume all oxygen from the water and disrupt the habitat of the stream bed.
Maintain A Healthy Backyard Habitat
Populate your yard with native plants and ask the extension agent of your local community to help you fight off any invasive plant species. Replace toxic pesticides and herbicides with safer options. Sterilize bird feeders and baths often to stop diseases from spreading. Prevent wild animals from raiding pet bowls and trash cans by bringing pet food indoors overnight and securing your garbage in safely closed bins.
Support An Organization That Fights To Save Endangered Species
If you care a lot about saving a particular endangered habitat or species, seek out an organization who is on a mission that accommodates your concerns. Volunteer, donate or materialize your support by adopting your favorite endangered species.
Advocate For Conservation
Start studying about how you can assist in pressuring government officials on issue policies and decisions regarding endangered species. Stay informed on how to effectively engage in civilian advocacy by signing up to relevant newsletters.
Vote
Become a member of the League of Conservation Voters, a national non-profit that works toward turning environmental values into the nation’s priorities by promoting the adoption of fair environmental policies and electing candidates with eco-friendly views who will take ownership of, and implement, these policies.
Lead By Example
As you gain more insight about how to protect endangered wildlife, you will become more capable of conveying that knowledge to other people. It is more efficient to share your own relevant efforts and experiences with your friends and family, than simply flooding them with dos and don’ts. To lead by example is the most effective way to show people how to start changing their lives.
Reduce Or Remove Meat, Dairy And Eggs From Your Diet
The one action with the most pronounced impact on the preservation of the environment is to become a vegan. Animal farming is the number one cause of water consumption, pollution, and deforestation. Livestock has a higher greenhouse effect on the atmosphere than fossil fuel consumption. The farming industry is the principle cause of rainforest demise, soil erosion, habitat loss, species extinction and dead zones in the oceans. Enormous amounts of food, water, energy, and land are required to raise animals for food, on top of the immense animal suffering it causes. By opting to consume exclusively plant-based food, you aid in the rescue of our planet, while easing animal suffering at the same time.
How You Can Help Animals